$ 19.95
$ 7.95
In Stock
SKU: METALEARTH-KRCS
Command shuttle of Lord Kylo Ren, a member of the Knights of Ren and the First Order.
Back to: Aircrafts and Spacecrafts

The command shuttle was first seen in the second teaser for Star Wars: Episode VII The Force Awakens. The craft was equipped with a nose-mounted loading ramp and paired retractable stabilizers, and was driven by two ion engines.

The First Order emerged in the years that followed the deaths of Emperor Palpatine and his apprentice, Darth Vader. Inspired by the principles of the fallen government and led by former officers of the Empire, the First Order fought against the Resistance.

Simply pop out the bits and connect using the tabs and holes. Absolutely no gluing or soldering is required!

Once built, it makes a great little accessory to finish off an office or study desk. Collect the whole range!

Instructions are included. Recommend a pair of tweezers or needle nose pliers (not included) to help you bend the metal pieces.

Recommended for 14+ years and those with patience. 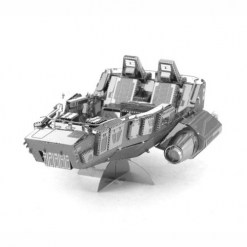